There are 37 species of wild cats within the world, 30 of which are regarded as little wild cats. The much more well-known species include the bobcat, lynx, margay, ocelot, and the wild cat. There are also several species not so nicely know such as the sand cat, fishing cat, pampas cat, Geoffrey’s cat, Pallas’ cat. Of the little cats the leopard cat is probably one of the most common and widespread, occurring throughout a lot of Southern and Eastern Asia, including the Philippines and Indonesia. Most authorities do not think about the leopard cat in imminent danger of extinction but the destruction of habitat by rapidly expanding human population, forest clear cutting, slash and burn, and soil erosion, remains a constant threat to wild cats as they’re forced into smaller and smaller areas in which to live. Within the US, you will find approximately 27 leopard cats in zoos and an unknown number owned by private citizens.

The Bengal Cat is unique amongst domestic cats, in that it’s descended from crosses with the Asian Leopard Cat, a small wild spotted cat, weighing about ten pounds. Here we look into the nature of the Bengal’s wild ancestor. The general build of an Asian Leopard Cat (Felis bengalensis) is similar to a normal domestic cat, but with somewhat longer legs along with a longer back. They have a relatively little head having a short narrow muzzle, large eyes (because of their nocturnal habits) and a thick tail of about 11 to 14 inches in length. Body length varies between 25 to 32 inches, and they weigh between 7 to 15 pounds. Size and weight vary between subspecies in various geographical regions, but the males are generally heavier than the females. There are around ten sub-species, showing distinct variations in body color. For instance, cats in the Northern regions tend towards reddish brown spotting on a yellowish-grey background and leopard cats from more humid regions tending to be more ochre-yellow to brownish. Now that the Bengal breeding programme is maturing, much more Leopard Cat bloodlines are becoming introduced into the breed, bringing with it this diversity of colors. The cats’ stunning markings, which have in numerous ways been their downfall by attracting the attention of the fur trade, are striking and show some variation between people. All subspecies have a spotted or ringed tail, with a black tail tip, four black bands running from the forehead to the back of the neck, breaking up into elongated spots on the neck and shoulders, frequently forming a ” broken necklace”. The round black ears have a white spot on the back, and all cats have a white underside, throat and cheek-flashes. The under parts are spotted on the white background. The body markings can be solid or rosetted and sometimes show marbling. 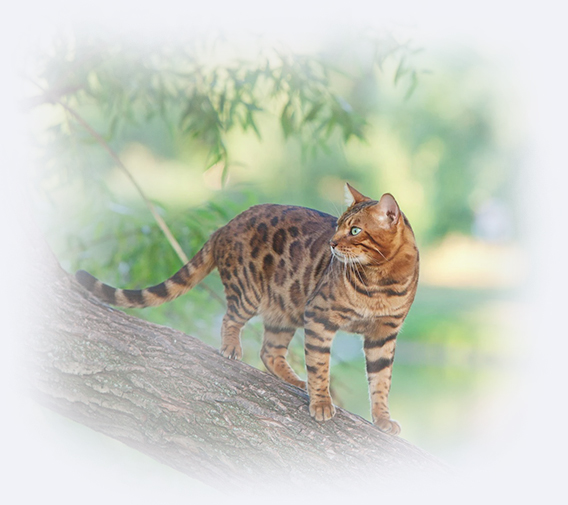 Despite its name, the Asian Leopard Cat is not restricted to Southern Asia, but can be found across India, via China, Korea and also the Soviet Far East. It can also be found on islands like Sumatra, Philippines, Taiwan, Borneo, Bali and Java. Naturally, the widespread habitat of the Asian Leopard has led to many various names, such as the Javan cat, Wagati cat, Chinese cat or “money cat”, so known as simply because the spots resembled Chinese coins. Of the small cats, Felis bengalensis is most likely one of the most typical and widespread, and most authorities don’t consider it to be in imminent danger of extinction. Nevertheless, the destruction of its habitat by rapidly expanding human populations, deforestation, farming, and soil erosion, all remain threats to the wild cat populations. The Asian Leopard Cat has therefore been placed on Appendix II of the CITES (The Convention on International Trade in Endangered Species) and its trade is regulated as an endangered species.

Asian Leopard Cats are generally solitary and nocturnal in behavior and prefer brush and forest as their habitat. They make their dens in hollow trees, little caves or under large roots and, living in a wide variety of environments, have an unusually wide variety of abilities. For instance, they often live near water and are accomplished swimmers and fishers. This legacy lives on in the Bengal’s liking for playing in water, and pawing at aquariums! Equally, they are extremely agile climbers and at home within the trees, hunting for birds, squirrels, tree shrews along with other prey. Indeed you will find some reports of tropical Leopard Cats being totally tree dwelling in their nature. As a rule, they don’t make good pets, being solitary and reclusive, rarely allowing humans to touch or handle them. They are carnivorous hunters and could represent a threat to kids or other pets. Probably one of the most misunderstood aspects of the leopard cat’s behavior is, it’s reputation for ferocity and it’s inability to be domesticated. The Asian leopard cat has evolved as an efficient small predator that occupies a special niche wherein it lives and reproduces in what’s often a hostile world. Just simply because it does not settle effortlessly into our tame and domesticated world ought to not be a criteria with which we judge an animal “mean”. In Asia, some villagers are reported as keeping leopard cats around to hunt mice. There have been many reports of the leopard cats becoming very friendly and following their owners around the house. However there has also been stories of leopard cats, bottle raised from birth, that revert to their wild and shy temperaments upon maturity, to realize that they are not an easily domesticated animal. Perhaps that is as it should be. Many people have neither the temperament nor the facilities to keep wild cats and most of these cats are better off in their wild homes. I believe that the Bengal is the ideal answer to satisfy the require in many of us to live with exotic spotted cats. Although understanding the leopard cat and it is behavior, might go a lengthy way to helping us comprehend our Bengals, perhaps the reverse is also accurate. Perhaps in living with and understanding our Bengals, we will come to appreciate and care about the future of the leopard cat and it’s type, who are relying on our good will for their extremely survival in the lands they inhabit.The Asian leopard cats are solitary even though their territories will frequently overlap. They have an average lifespan of 10 to 15 years.